Wryly Anderson is a performance artist specializing in puppetry and object theatre. In nearly 15 years of performance experience, Wryly has written, designed, built, performed and stage-managed in over thirty different puppet-theatre productions.

Trained by apprenticship with Carnival Sized Cinnamon Hearts (Vancouver) starting 2003, Wryly formed Moth Orbit Object Theater in 2010, and has since devised and performed in shows that have been invited to festivals and galleries throughout B.C.

Both as freelance artist and through his independant production company Moth Orbit Object Theater, Wryly continues to explore the dramatic uses of performing objects: how anything and everything can be brought to life, from everyday found objects to the most deliberately designed puppets, masks, costumes and sets.

Moth Orbit Object Theater is a moth-eaten monument built of found objects and rejected materials. Re-imagined and re-animated, trash becomes treasure and static materials become spirited. Each act of puppetry holds a mirror to the existential condition and suggests a solution: it is possible to remain enchanted despite an awareness of the mechanisms at play.

Celebrate the art of the puppet in the beautiful tourist destination of Victoria, BC, Canada www.tourismvictoria.com 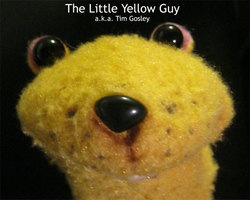